With the aspiration to serve the Candidates similarly in the upcoming election, the candidates found themselves doubting where Rooble fits in the process. 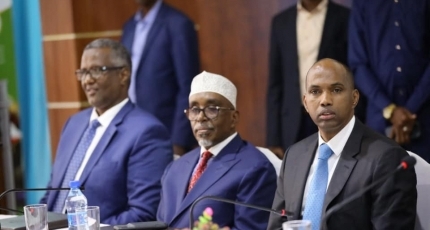 The 7th president of Somalia said he is satisfied with Roble's engagement with stakeholders in the efforts to reach a broad-based consensus on the electoral dispute, according to a statement he posted on his Facebook account.

His remarks are contrary to the latest statement issued by certain members of the Union in which they voiced concern and raised question over the serious engagement of PM Roble in the implementation of they agreed upon.

With the aspiration to serve the Candidates similarly in the upcoming election, the candidates found themselves doubting where Rooble fits in the process.

However, the ex-President said Roble is someone they looked up to in his power to bring change to the current political impasse surrounding the country’s national elections.

“The 2 May conference will be the stepping stone to finding resolutions under the 17 Sep Agreements to the stalemates we have experienced for the past months,” he said.

“Engaging in talks still remain necessity; and we have to be hopeful and look forward to our PM Roble,” he added.

The Oppositions seem to have divided over the issues they had agreed with the acting PM, Mohamed Hussein Roble since he was handed over the responsibility and the process of holding the elections to him.

Somali PM is set to host a conference in Mogadishu on Thursday, May 20 that aims to break the standoff over the electoral process with the international community calling for immediate elections.