Somaliland claims it seceded from the rest of Somalia in 1991 and has nothing to do with elections in Mogadishu. 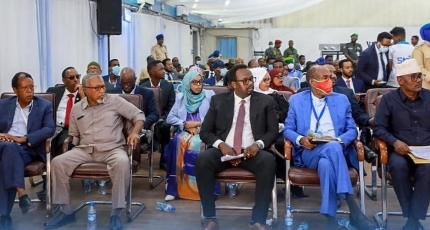 MOGADISHU, Somalia - Electoral delegates who were drawn from clans in northern Somalia elected senators to join the 11th Parliament of the country during an indirect Mogadishu election.

Despite a political crisis, the Horn of Africa country kicked off last July the election of the 54-member Upper House in the five Federal States and now in the capital for the north's 11 seats.

Abdi Hashi, the outgoing Senate speaker won the first seat after his rival candidate Said Omar dropped out of the race on Tuesday at Afisyoni tent in the vicinity of the heavily guarded airport.

In the second seat, incumbent constitution minister Salah Ahmed Jama had an easy victory after defeating his challenger Ibrahim Idle Suleiman, who served as chief justice from 2016-2018.

The Senators normally are representatives of the regional states in the national government in Mogadishu. They are not more powerful just like the Lower House's 275 lawmakers.