The chief of the Somali army is leading the anti-al-Shabaab operations in the Middle Shabelle region. 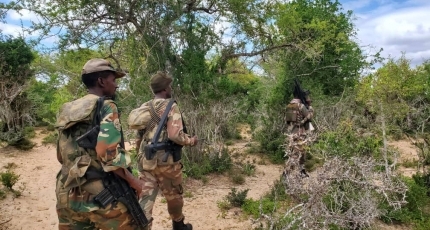 MOGADISHU, Somalia - Nearly 100 militants have been killed and dozens wounded in an offensive against Al-Shabaab in the Middle Shabelle region, south of Somalia, an official said.

Speaking to the state media, General Odowa Yusuf Rage said the government forces have had the upper hand in the latest operations in the region which is aimed at flushing out the terrorists from their hideouts near Jowhar and Rage Elle.

The ongoing military offensive comes as Somali leaders have signed an electoral agreement in Mogadishu on May 27 which paves the way for indirect elections in the Horn of Africa country.

Somali forces are preparing to take over the security responsibility from African Union soldiers [AMISOM] who are expected to pull out of Somalia by the end of this year.

AMISOM - which is made up of troops from Burundi, Uganda, Kenya, Djibouti, and Ethiopia has been operating in Somalia since 2007 and helped the government to regain control of key towns and the capital, Mogadishu from Al-Shabaab.