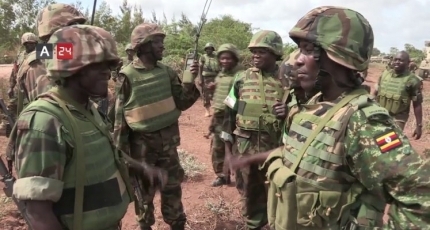 MOGADISHU, Somalia - About 28 senior officers from the military and police components of the African Union Transition Mission in Somalia (ATMIS) and the Somali National Army (SNA) have wrapped up a joint training to enhance their abilities to reach out to communities in the liberated areas, officials said on Sunday.

The aim is to sharpen these officers, who are new in the mission, in such a way they will be able to operate independently within local communities,” Kabwita said in a statement issued in Mogadishu, the capital of Somalia.

ATMIS Chief Military Information Officer and Acting Chief of Staff, Hans Nyange told the participants to apply most of the knowledge acquired in their various sectors.

It is also significant to remember that CIMIC tasks involve coordination, cooperation, and sharing of information between the military and the civilian population,” Nyange said.

Mohamed Foley, SNA security officer, said the training was important to him and his colleagues, especially on how to build mutually beneficial relations with members of the civilian population.

We learned a lot in this training including the nuances in the local communities and how to conduct ourselves in newly liberated areas where the population need quick impact projects to meet some of their immediate needs,” Foley said.

ATMIS, which replaced AMISOM, began operations on April 1 and will work to prepare the Somali security forces to take over responsibility for security in the country by 2024.