During their stay, the ministers are expected to visit troops stationed in the town and receive reports on the situation in Gedo and areas near the Kenyan border from the army commanders there, per sources. 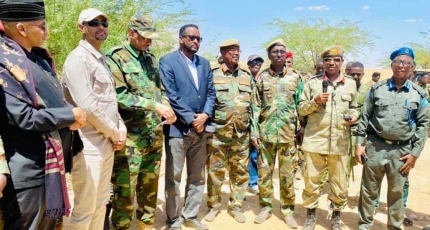 MOGADISHU, Somalia – The Federal Government of Somalia says it has dispatched a ministerial-level delegation to the conflict-hit Gedo region just days after deadly clashes left at least 11 people dead.

The delegation, including defense, justice, and information ministers arrived in Dolow district airport by a chartered small plane left Mogadishu on Thursday morning, where they proceeded to Beled-Hawo town.

Their arrival comes as tension grows in the border between Somalia and Kenya following abrupt fighting in Beled-Hawo that drew regional pressure on both countries to exercise restraint and open a dialogue.

During their stay, the ministers are expected to visit troops stationed in the town and receive reports on the situation in Gedo and areas near the Kenyan border from the army commanders there, per sources.

Reports say Jubaland troops are regrouping in small villages on the border and likely to launch a counter-offensive against Somali forces in Beled-Hawo.

The tension was brewing in Gedo since 2020 and witnessed clashes between Jubaland troops and the Somali army after Farmajo deployed Turkish-trained soldiers to several towns from Mogadishu by planes.

Last Monday, Jubaland forces seized briefly the control of Beled-Hawo from SNA following an overnight attack but the next day they have been pushed back by the government troops who are still in the city.

The Somali government said militias trained and organized inside Kenya attacked the town, a claim that Nairobi has rejected as” baseless and unfounded”.

In addition, Kenya called for calms in the border region, saying if the fighting continues unabated, the situation could further destabilize the East African region and reverse gains made against Al-Shabaab.

Somalia cut off diplomatic ties with Kenya last year and has summoned its ambassador in Nairobi in response to what Mogadishu called “frequent interference” in its internal affairs, including the next polls.