Somali leaders meet for the second day in Mogadishu

The talks are aimed at finding a common agenda for the upcoming electoral dialogue mediated by the international community. 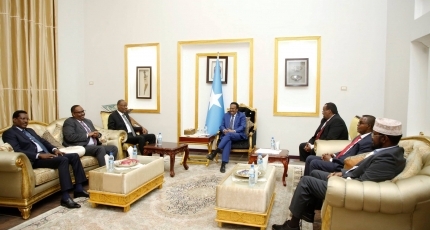 MOGADISHU, Somalia - The preliminary talks at Afisyoni tent in Mogadishu between Somalia's outgoing president Mohamed Abdullahi Farmajo and leaders of the five regional States entered for the second day.

The sides are discussing issues, including election security, the current government's legitimacy, September 19 attack on former leaders and protestors in Mogadishu which is seen as vital for the upcoming dialogue in Somalia.

The ice-breaking two-day meeting brought together outgoing president Farmajo, mayor of Mogadishu, and leaders of the five regional states. It seeks a unified agenda before holding the formal electoral forum.

The leaders will conclude their conference later today and issue a joint communique on the agreement reached during their face-to-face summit under African Union forces' protection.

Farmajo's 4-year mandate expired last February with no successor in place, plaguing the country into a constitutional vacuum and worst political turmoil which risk the hard-won security gains and progress made in the state-building efforts.