The leaders from the Federal government and the Federal States are set to meet for the fourth day of the talks on the election crisis. 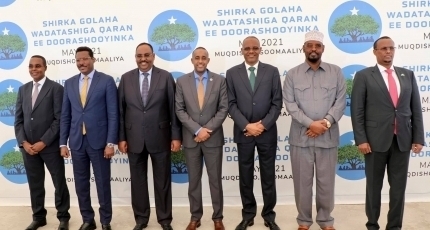 MOGADISHU, Somalia - The political leaders in Somalia have gathered on Monday for a third consecutive day of arm-wrestling over the electoral stalemate, with little sign that fundamental differences had narrowed.

The government spokesperson Mohamed Ibrahim Moalimuu has told the local media that the talks will continue to include the opposition in the negotiations aimed at reaching an inclusive agreement over the pre-poll crisis in Somalia.

The talks at the Afisyoni tent near Mogadishu airport had been opened by Somali PM Mohamed Hussein Roble on Saturday with the attendance of leaders of Puntland, Galmudug, Hirshabelle, Southwest, and Jubaland as well as the governor of Benadir region.

Roble has on Monday held a meeting with Senate speaker Abdi Hashi at a hotel in the airport, discussing the dispute over the selection process of the northern lawmakers representing Somaliland.

The ongoing consultative electoral dialogue is the latest attempt to decide on the country's future after failure in a timely election at the end of Farmajo's term last February that led to violence in Mogadishu over his illegal two-year term extension.