The meeting comes amid an offensive against Al-Shabaab in central Somalia. 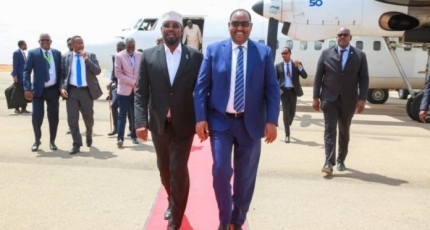 MOGADISHU, Somalia - The leaders of the Somalia's regional states arrived in Mogadishu on Wednesday for crucial talks with Central government.

The consultative forum is expected to kick off on Thursday at Villa Somalia with reports that war on Al-Shabaab and petroleum issues will dominate the agenda.

The leaders of Puntland, Southwest, Jubbaland, HirShabelle and Galmudud as well as Mogadishu mayor will be in attendance.

The meeting is the second of its kind since President Hassan Sheikh assumed office in May this year following his election.

The president has last week signed an oil deal with U.S. company named Coastline Exploration which wired $7 million to the Central Bank of Somalia.

The firm will conduct offshore seven oil blocks along the coast of Somalia.