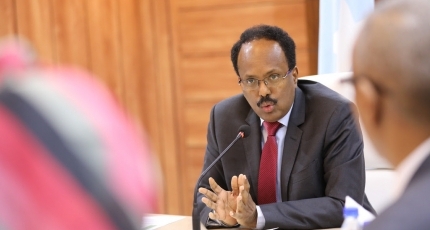 MOGADISHU, Somalia - Somalia’s international partners are mediating between the Federal Government and the Federal Member states to bring an end to the deepening deadlock over the upcoming electoral process.

The leaders of the two sides are expected to convene a meeting brokered by the foreign diplomats at the Afisyoni compound near the airport in the coming few days to reach a consensus on the election row.

UN envoy James Swan and US Ambassador Donald Yamamoto are reported to have organized the summit after the outgoing president failed previous calls for election talks with regional states leaders.

Villa Somalia did not announce the date for the meeting to kick start due to the standoff between the two sides, mainly Farmajo and the heads of Jubbaland and Puntland Madobe and Deni respectively.

The latest attempts made by Farmaajo to call on the regional state leaders and Mogadishu mayor ended in vain after Jubbaland and Puntland demanded the meeting must be held in a safe venue in the city.

KON learned that the International partners asked Farmajo not to declare the opening date of the meeting in Afisyooni Site where the incumbent was elected on 8th Feb 2017 by the parliament members.

Somalia's crisis is far from over as Farmajo whose term expired last month was accused of clinging to the Presidency through the use of force and not willing to hold an inclusive, free, and fair election in Somalia to elect his successor.