Barre is awaiting the endorsement of the parliament has last night paid a courtesy call on former leaders Sharif Sheikh Ahmed and Mohamed Farmajo at their houses. 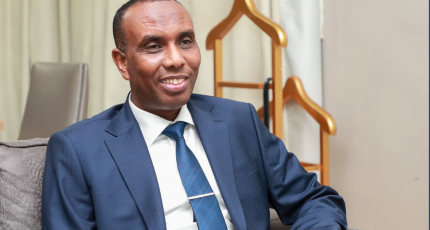 MOGADISHU, Somalia - The PM-designate Hamza Abdi Barre began to reach out to the heavy-weight political leaders and former presidents in Mogadishu before his approval.

Barre is awaiting the endorsement of the parliament has last night paid a courtesy call on former leaders Sharif Sheikh Ahmed and Mohamed Farmajo at their houses.

He also met with ex-PM Hassan Ali Khaire who was ousted in a no-confidence motion in parliament in July 2020 after falling out with Farmajo over the country’s elections.

Sources tell Keydmedia’s Somali service that Hamza asked the leaders he met to throw their weight behind him in winning the vote of confidence from the parliament.

The PM-designate has previously held similar talks with the speakers of the two Houses Aden Madobe and Abdi Hashi soon after his appointment in mid this month.

Hamza was expected to go to the parliament for approval on Wednesday but the session was postponed due to the absence of the president who is visiting the UAE.

The president’s two-day visit was extended after members of his delegation tested positive for Covid-19 upon their arrival in Abu Dhabi, according to the sources.

Hamza who is a member of Hassan Sheikh Mohamud’s UPD party was named on June 15, becoming the 21st prime minister of Somalia. He replaces Mohamed Hussein Roble.