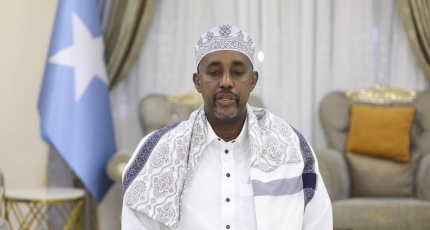 MOGADISHU, Somalia - Somali PM is scheduled to embark on Monday a domestic trip to some of the regional states in the country as part of his efforts to accelerate the electoral process.

Mohamed Hussein Roble will pay his first leg of a visit to Galmudug state's capital Dhusamareb, where he will assess the preparation of the upcoming Lower House election in the city.

The PM will hold a meeting with Galmudug leader Ahmed Abdi Karie [Qoor-Qoor] and the election officials during his stay, according to the sources in Villa Somalia, who spoke to KON.

The country's Lower House polls which saw a three-time delay this year are set to kick start this month and complete by the end of December amid pressure from the international partners.

The prime minister urged the leaders of the five Federal States in Somalia to work around the clock on the completion of the long-running parliamentary election that began in July this year.

The Senate election was this week wrapped up after Galmudug elected its last remaining two seats, marking the end of a three-month process picking 54 senators from all regional states.

The international community, including the U.S., urged the political leaders to expedite the voting exercise in two months to help the country get a new government by the beginning of 2022.