Roble who assumed power last year is undertaking his first official visit to Doha at the invitation of Qatar's emir, according to multiple sources. 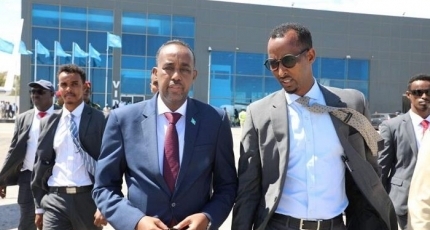 MOGADISHU, Somalia - Somali Prime Minister Mohamed Hussein Roble will leave for the first trip to Qatar in the coming hours amid a political crisis at home, Keydmedia has learned.

The prime minister's maiden visit to Doha builds on the sustained engagement between Somalia and Qatar and enhancing bilateral cooperation in diverse fields, according to the sources.

Roble, who is in charge of the security and election, is said to be seeking financial aid from Qatar to facilitate the electoral process after donors halted budgetary support to his government.

Qatar played a vital role in the election of Farmajo in February 2017 after funding his campaign with millions of US dollars through Fahad Yasin, the most powerful man in the government.

The PM is expected to travel to Djibouti in the first leg of his overseas trip after receiving an invitation from President Ismail Omar Guelleh to discuss ways to mend the strained relations.

Sources added that Roble has postponed a scheduled visit to Saudi Arabia and the United Arab Emirates [UAE], which had been in diplomatic tension with Qatar since June 2017.