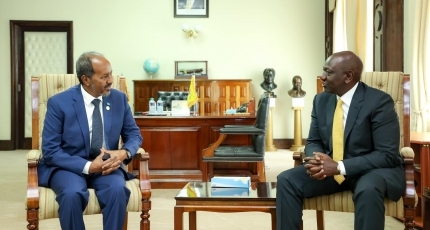 NAIROBI, Kenya - The President of Kenya William Ruto on Wednesday hosted Somali President Hassan Sheikh in the first meeting at State House, Nairobi since his inauguration on Tuesday.

Ruto said in a statement posted through his Twitter handle that the discussions with his Somali counterpart centered on the security situation in Somalia and the Horn of Africa.

Also, the two leaders reviewed the July 2022 agreement that Uhuru, the immediate former Kenyan president signed with Mohamud on the trade of Miraa and fish between Kenya and Somalia.

We will fast-track the implementation of the Joint Commission for Cooperation between Kenya and Somalia. This will boost trade in Miraa and fish and ease movement between our two nations.” Ruto stated

In a CNN interview, Ruto said last week that he was looking forward to working closely with Somalia’s leader Hassan Sheikh Mohamud to overcome challenges in the Horn of Africa nation.

We are looking forward to working with him and with the international community so that we can square out the challenges in Somalia, and make it possible for Somalia to take care of its own security concerns,” he added.

The relations between Somalia and Kenya hit a low point and were sometimes cut off during the last two years of Farmajo's presidency and it is now improving after the leadership changes in both countries.