Previously, Somali businesses have been the target of a fascist attack in Ankara's central Kızılay neighborhood, following a Turkish newspaper's racist reporting on Somali nationals. 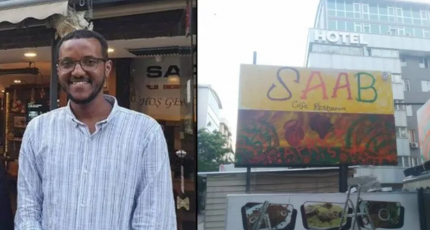 Abdullah was first sent to the Ankara Police Department Smuggling Branch Directorate, then might be transferred to Akyurt Repatriation Center, his lawyer Salih Efe stated.

"If Abdullah goes to Somalia, his life will not be safe. It is life-threatening. He hasn't been to his hometown for years. Muhammad's residence permit expired and they did not extend it. However, the residence permit of his wife, who is a student, continues. They should not break the integrity of the marriage. We will do our best to ensure that this transaction does not happen,” Efe added.

“SAAB Restaurant Owner Muhammed was taken into custody. They're going to transfer him to a repatriation center. But his Constitutional Court (AYM) application and the administrative case continue! Release him immediately, you are violating his freedom, breaking the law!” Peoples’ Democratic Party (HDP) lawmaker Ömer Gergerlioğlu tweeted on Sept. 20.

Previously, Somali businesses have been the target of a fascist attack in Ankara's central Kızılay neighborhood, following a Turkish newspaper's racist reporting on Somali nationals.

Due to the police's racist acts, SAAB Cafe had to previously change its signage many times.

The cafe’s signage was painted white on the grounds that the green, yellow and red colors "reminds a terrorist organization,” the opposition DEVA (Future and Progress) Party lawmaker Mustafa Yeneroğlu had announced in June, saying “tyranny has won again…”

Gergerlioğlu had announced in July that a deportation order had been issued for Abdullah.

"His crime was to operate the Saab restaurant in compliance with the law! The police said, ‘Shut down,’ and he was subjected to all kinds of racist and discriminatory treatment. Today, a deportation order has been issued for Muhamed Abdullah from Somalia. There is a danger of death if he returns to his country!" he had said in a tweet.