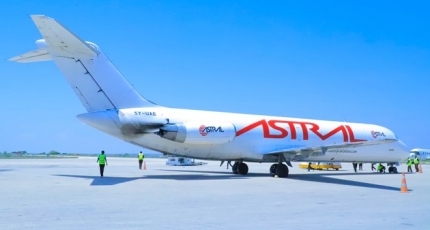 MOGADISHU, Somalia - The Somali government has yet again announced a decision that certainly worsening further the boiling diplomatic tension with neighboring Kenya.

An official with the Civil aviation confirmed to KON English Service that the outgoing Somali government has banned Astral Aviation, a cargo airline based in Kenya from the country’s airspace.

The government provided no more details about its hasty decision which comes days after Kenya suspended all flights from and to Somalia for three months. The reason behind this remains unclear.

The KON source says aircrafts belonging to Astral Aviation, a cargo airline based in Nairobi will no longer operate in Somalia after ferrying election materials for Somaliland, a northern breakaway region.

The airliner didn’t respond to KON's request for comments on the ban.

Astral Aviation joins now other airplanes barred from Somali skies for violating previous orders, On May 13, Kenya gave 72 hours to transport election supplies for Somaliland ahead of May 31, 2021 vote.

The relations between Somalia and Kenya remained deadlocked for years over the Jubaland issue despite Qatari mediation that led Mogadishu and Nairobi to restore ties.

During his four-year presidency, Farmajo failed to maintain and properly handle the foreign policy which resulted in Somalia’s worst political crisis over the electoral process.

Most airlines operating in Somalia are registered in Kenya due to the lack of a national flag carrier that serves the public due to the three-decade conflict that destroyed the nation.