The minister of foreign affairs said the Somali government will hold AMISOM leadership accountable for their illegal actions in the country. 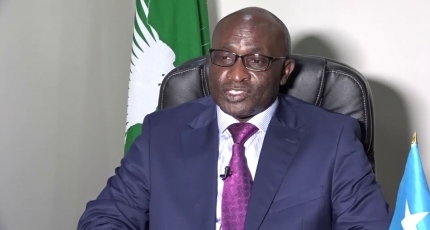 MOGADISHU, Somalia - The Federal Government of Somalia has on Thursday ordered Simon Mulongo, the Deputy Special Representative of the AU to leave the Horn of Africa country.

In a statement, the Somali Ministry of Foreign Affairs declared the AU diplomat “persona non grata” in what seemed retaliatory move after he violated his mandate in the country.

Somalia has written to the AU asking to replace Simon Mulongo, a Ugandan with a neutral and discipline official who can fulfill his responsibilities without interfering in internal affairs.

The Ugandan official who has been serving as deputy AU envoy for several years was accused of "activities" that do not comply with AMISOM's mandate and security strategy in Somalia.

The Somali Federal government did not elaborate on the nature of the activities. The Ministry of Foreign Affairs asked Mulongo to leave the country within seven days from November 4.

In a tweet, Somali Foreign Minister Mohamed Abdirizak said the federal government would hold AMISOM officials in top positions who try to tarnish the image of the country.

"The FGS will hold accountable AMISOM personnel, particularly those at the leadership level, who are expected to be beyond reproach in their integrity as they discharge their duty under the UN/AU mandate," he added.

The decision comes as Somalia and AU are in deadlock over the exit of AMISOM by the end of 2021. Last month, AU's peace and security proposed to bring UN peacekeepers to Somalia.

Somalia has rejected the proposal to turn AMISOM into a hybrid AU-UN mission, says this is against its strategy to take over the security responsibility from the departing foreign forces.