The president said the decision to expel Madeira was issued by an office that didn’t have sole responsibility for making such a crucial decision. Madeira could not be immediately reached for comment. 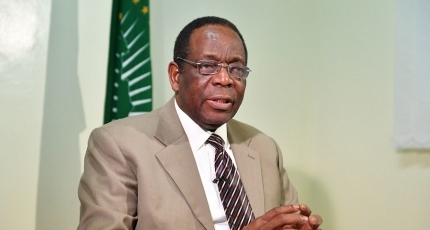 In a late-night statement, Roble accused Madeira of 'engaging in acts that are incompatible with his status.'

Roble requested that the AU Commission recall Madeira and 'comply with this request.

But Somali President Mohamed Abdullahi Mohamed, also known as Farmaajo, immediately rejected the expulsion in what appears to be another dispute between the country’s top leaders. In a statement, the president said that he had not authorized any action against Madeira. He also had not received any reports from the Ministry of Foreign Affairs of Madeira committing acts against the sovereignty of the country, he said.

The president said the decision to expel Madeira was issued by an office that didn’t have sole responsibility for making such a crucial decision. Madeira could not be immediately reached for comment.

Madeira, who is from Mozambique, was appointed to the office in October 2015. He is not the first foreign diplomat to be expelled from Somalia.

Haysom’s expulsion from Somalia came after he had asked the government whether U.N.-supported forces were involved in the shooting of demonstrators in Baidoa in December 2018.

The shooting, which led to the death of about a dozen people, occurred as violence broke out following the arrest of former deputy al-Shabab leader Mukhtar Robow, also known as Abu Mansour, to block him from seeking election for regional leadership.

Before his expulsion, Haysom demanded answers from the Somali government on the legal basis for the arrest of Robow, who remains in detention. In an exclusive interview with VOA in October last year, Robow said he was being held for political reasons and to prevent him from seeking office.

The U.N. mandate gives ATMIS forces to reduce the threat posed by al-Shabab, support the capacity-building of the integrated Somali security and police forces, and conduct a phased handover of security responsibilities to Somalia, according to the resolution.

In the first official statement by the Somali government, Roble announ22ced Wednesday night that he welcomed the new ATMIS mission and looked forward to working with the new mission head.

But security experts say there is little difference between AMISOM and ATMIS.

To me, (it’s) just a name change exercise,' said Samira Gaid, who oversaw Somali security reform under former Prime Minister Hassan Ali Khaire. 'Nothing substantive has changed, meaning the troop numbers, the composition of countries, and the sectors they are located at, their mandate remains largely the same, fighting AS (al-Shabab) and supporting FGS (Federal Government of Somalia).

Gaid, now the executive director of Hiraal Institute, a security think tank, said that she believed the Somali government could generate forces before the ATMIS withdrawal but that there was uncertainty over equipping the forces.

'The Somali government does not have an issue with force generation. It has an issue with force sustainment, and that remains the main issue,' she said. 'The forces can be generated, but without the required lethal and nonlethal support, the transition will still be unlikely.'