Hassan Sheikh Mohamud was elected president of Somalia on 15th May in Mogadishu, five years after being voted out of office. 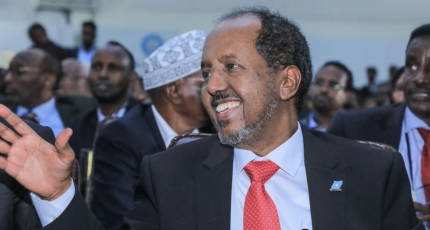 MOGADISHU, Somalia - Hassan Sheikh Mohamud was today inaugurated as the 10th president of Somalia in a colourful ceremony at the airport hangar attended by over 1,000 people including two neighbouring presidents, two prime ministers and dozens of foreign diplomats.

Ahead of the event, mortar shells were fired at the airport late last night, killing several people in a nearby village within the Wadajir district during a lockdown imposed for security reasons.

Mohamud, who was elected on May 15 in an indirect vote by the members of the 329-seat parliament promised to restore Somalia’s dignity and bring peace and reconciliation to the country after three decades of conflict.

The win of Hassan Sheikh Mohamud in the May 15 election marked the conclusion of a long-running electoral process in Somalia due to delays that resulted from the political crisis.

The Horn of Africa country’s population estimated at nearly 15 million did not cast votes in the indirect election that happened within the parliament. The MPs were the eligible voters.

Mohamud campaigned on the slogan: "Somalia at peace with itself and the world", which translates that he will have no a particular alliance as Farmajo did during his presidency from 2017 to 2022.