Somalia on the brink of famine aid agencies warn

Jens Laerke, spokesperson of the U.N. humanitarian office (OCHA) said: “They have kept famine outside of the door but nobody knows for how much longer. 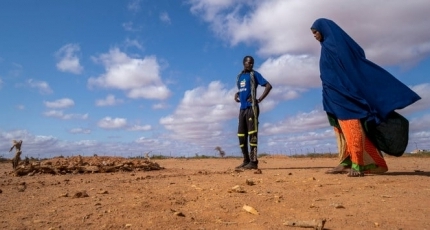 Fartum Issack, right & her husband, Adan, stand by the grave of their 1-year-old daughter at IDP camp on outskirts of Dollow

THE NUMBER of Somalis experiencing catastrophic food shortages and many dying of hunger is expected to rise to over 700,000 next year prompting fears of an imminent famine according to a coalition of United Nations agencies and aid groups.

According to the Integrated Food Security Phase Classification (IPC), which measures the severity of food crises around the world, the most severe level, “IPC Phase 5 Famine,” has been avoided. However it warns that the possibility of famine in the East African country is steadily increasing.

Earlier this week the International Federation of Red Cross and Red Crescent Societies (IFRC) echoed these concerns. The organisations said that Somalia’s worst drought in 40 years is forcing more and more people to leave their homes in search of food security and greener pastures for livestock.

They said that the likelihood of famine will increase by about 25% if displaced people are not given the help they urgently need.

It is estimated that more than 200,000 Somalis are suffering catastrophic food shortages and many are dying of hunger. Crops and livestock have been wiped out across the Horn of Africa due to a two-year drought, and the cost of food imports has skyrocketed as a result of the conflict in Ukraine.

Long-running Islamist insurgency has hampered the ability of humanitarian aid agencies to reach some regions of Somalia, where 3 million people have been displaced from their homes as a result of conflict or drought. However despite this the response of aid organisations has meant that famine has been averted so far.

Jens Laerke, spokesperson of the U.N. humanitarian office (OCHA) said: “They have kept famine outside of the door but nobody knows for how much longer.

“That people are dying from hunger, there’s no doubt about it, but I cannot put a number on it,” he told a recent news briefing in Geneva following the IPC’s analysis.

The East African country’s last famine, in 2011, killed a quarter of a million people. Half those deaths occurred before a famine was officially declared.

Mohammed Mukhier, IFRC’s regional director for Africa said that providing displaced people with tailormade humanitarian assistance is one of the most efficient ways of protecting host families from slipping into hunger themselves, while at the same time ensuring people on the move meet their nutritional needs.

He said: “We reiterate our call to prioritize the growing hunger crisis in Somalia, the country’s worst drought in 40 years. As an organisation, our focus is on displaced people, because of our unique ability to reach them with assistance.” The OCHA is appealing for $2.3 billion to respond to the crisis in Somalia, of which it has so far received $1.3 billion.