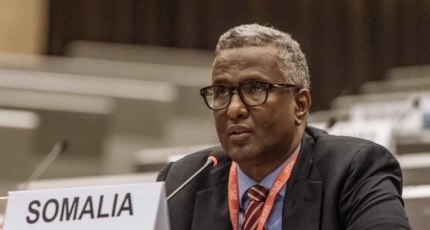 CAIRO -- Abdirahman Abdishakur Warsame, Special Envoy of the Somali President for Humanitarian Affairs and Drought, praised the support provided by the UAE under the leadership of President His Highness Sheikh Mohamed bin Zayed Al Nahyan, to those affected by the drought in Somalia.

In a statement to the Emirates News Agency (WAM), Abdul Shakour said, “The UAE is a pioneer in providing the necessary support to Somalia in this crisis, as it was the first country to respond to the appeal launched by the Somali government to provide urgent relief to those affected by drought.”

He noted that the UAE established an air bridge to transport supplies and sent a ship carrying more than 1,000 tonnes of food and relief items to meet the needs of approximately 2.5 million people.

The conference included the participation of senior officials from Arab relief organisations and UN humanitarian bodies and aimed to coordinate action plans to address the worsening food situation in Somalia.

For his part, Elias Sheikh Omar Abu Bakr, Ambassador of the Federal Republic of Somalia to the Arab Republic of Egypt and Permanent Representative to the Arab League, expressed his appreciation for the UAE's efforts to support those in need.

He thanked the UAE for providing critical supplies to Somalia through its relief and humanitarian institutions.

Abu Bakr stressed that the UAE’s commitment to providing food and medical assistance to those in need is an extension of the values that have distinguished the UAE since its formation as a country under the UAE's Founding Father, the late Sheikh Zayed bin Sultan Al Nahyan.

He also thanked the UAE's leadership and people for this assistance, expressing his wishes for the UAE to experience continued security, safety, progress, and prosperity.