Somalia pushed closer to famine by US/NATO sanctions on Russia

Despite the gravity of the crisis, the US, other major powers, and financial institutions have ignored the UN’s humanitarian appeal as they turn their attention and resources to the war in Ukraine. 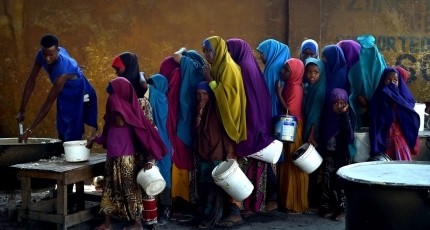 MOGADISHU, Somalia - Last week, UN Humanitarian Coordinator for Somalia Adam Abdel Mawla warned that Somalia was “on the brink of a deadly famine that could kill hundreds of thousands.” He said that 213,000 people face starvation by next September as global food prices hover near record highs and drought worsens.

The price of imported foodstuffs in Somalia has reached record levels, jumping by up to 160 percent. The price of a kilo of rice has more than doubled, rising from $0.75 to $2, while three liters of cooking oil has gone from $4.50 to $9.50, making it impossible for people in one of the world’s poorest countries—it’s GDP is just $7 billion, and more than 70 percent of the population live on less than $1.90 a day—to feed themselves and their families.

Mawla said that some 7.1 million of the country’s 16 million population face catastrophic levels of food insecurity and disease. Nearly one-third of the country’s population is hungry. About 1.5 million children under five are suffering from acute malnutrition. At least 448 children have died since January. Many more are malnourished, with scaly skin and hair that has lost its natural color, while others are sick with illnesses such as measles and cholera.

These appalling numbers are nearly three times the levels expected just two months ago, according to a joint statement issued by the various UN humanitarian agencies: the World Food Programme (WFP), the Food and Agriculture Organization (FAO), the United Nations Children’s Fund (UNICEF), and the Office for the Coordination of Humanitarian Affairs (OCHA).

This latest disaster to affect the war-torn country comes 11 years after the famine of 2011 fuelled by soaring food prices in 2008 that killed around 250,000 people in Somalia, half of whom were children under the age of six. Now once again, the Somali people are the collateral damage of the crisis of the global economic system.

Skyrocketing food, fertilizer, and fuel prices have been driven by the billions of dollars poured into the world’s stock markets, the failure of governments around the world to pursue a coronavirus elimination policy and thereby prolonging the pandemic and disrupting food supply chains, and the US/NATO sanctions on Russia that have included banning the country from the SWIFT money transfer system.

As the US Federal Reserve and other central banks raise interest rates to choke off inflation and increase the value of their currencies, investors are moving funds away from the world’s low and middle-income countries, in turn pushing down the value of their currencies and making their imports more expensive, while tighter credit is increasing borrowing costs for heavily indebted governments.

At the same time, financial speculation is driving food prices even higher, with a Lighthouse Reports investigation, The Hunger Profiteers, concluding that in April speculators were responsible for 72 percent of the buying activity on the Paris wheat market, up from 25 percent before the pandemic.

These external pressures have exacerbated the impact of the Horn of Africa’s extreme weather events, some linked to climate change, that has brought flash floods, cyclones, rising temperatures, a devastating locust infestation, and now the worst drought in 40 years. Up to 20 million people in Kenya, Ethiopia, and Somalia face the risk of starvation by the end of this year, according to the World Food Programme. Somalia, which like 14 other African countries imports over half of its food, has been particularly badly affected.

Four consecutive rainy seasons have been dry, amid unprecedentedly high temperatures. When the rains did come—October to December 2019 saw the wettest period—they were torrential and short-lived, causing flooding and breeding swarms of locusts. The drought drove 3.4 million people from their homes in Somalia in search of food as their crops failed and around three million livestock—up to 30 percent according to the FAO—perished, nothing short of a disaster in a largely pastoral country where families rely on their herds for meat, milk, and trade.

A further 850,000 people have been driven from their homes since the beginning of the year, with increasingly desperate families fleeing the drought-stricken areas and making their way on foot or on donkeys to emergency centers, healthcare facilities, and camps in towns and cities, including the largest on the outskirts of the capital, Mogadishu, that likewise struggle to afford food.

Somalia’s 2,400 settlement camps for internal migrants, now home to around one-fifth of Somalia’s population, are overcrowded and chronically short of resources, with many residents living in makeshift shelters consisting of just plastic sheeting and poles. More than a few are on the point of death.

Climate experts expect that this October to December’s rainy season may well fail, pushing the drought into 2023. It means that with supply routes cut and local harvests wiped out by the drought, there is simply no prospect of affordable food and other basic commodities.

The drought follows decades of conflict that started in 1992 after the overthrow of dictator Mohamed Siad Barre when the US intervened, under the pretext of protecting United Nations aid workers, to establish US control over the region after the collapse of the Soviet Union in 1991. Somalia occupies a strategic position straddling both the Indian Ocean and the entrance to the Red Sea through which around $700 billion in maritime shipping passes every year, encompassing nearly all trade between Europe and Asia, including from Washington’s arch-rival China. While the US was forced to withdraw after the “Black Hawk Down” incident in 1993, it continued its operations covertly through proxies.

In 2007, Washington resumed its military operations after the emergence of the Al-Shabab movement that now controls much of the southern part of the country, and since then has launched repeated airstrikes, including targeted drone strikes and missiles launched from naval ships, alongside special forces raids. Last month, President Biden approved the deployment of nearly 500 US troops in Somalia.

US operations have served only to intensify the conflict, compound the suffering of the Somali people and decimate the financial resources of its barely functioning, corrupt government. The newly installed regime, headed by Washington’s man in Mogadishu President Hassan Sheikh Mohamud, has no political or popular legitimacy. Heavily indebted and beholden to the International Monetary Fund, it struggles to pay its workers on time and has no plans to manage the crisis.

Despite the gravity of the crisis, the US, other major powers, and financial institutions have ignored the UN’s humanitarian appeal as they turn their attention and resources to the war in Ukraine. They have pledged only about 18 percent of the $1.46 billion needed for the Somali people, forcing the UN to cut its rations to those in dire need of aid. The amount needed pales into insignificance beside the imperialists’ expenditure on war and militarism that they like to justify in the name of humanitarianism. The US Pentagon alone spends more in one week than the amount sought by the UN agencies for Somalia.

So great is the threat of hunger, not just in Somalia and the Horn but across Africa, that President Macky Sall of Senegal, the head of the African Union, called for the lifting of restrictions on exports of Russian wheat and fertilizer. Speaking at a joint press conference in the Black Sea resort of Sochi, Sall said that Western sanctions on Russia had compounded Africa’s lack of access to grain.

While the UN’s General Assembly voted in March to condemn Russia’s invasion of Ukraine, the African continent was far less supportive of the US/NATO position: only 28 of Africa’s 54 countries supported the resolution, while 17 abstained, eight failed to vote and one voted against the resolution, reflecting Russia’s longstanding ties to many African countries, its position as Africa’s largest supplier of arms and their efforts to evade the suffocating clutches of the imperialist powers.