Qatar has been playing a role in the political affairs in Somalia for the past four years as it maintains close ties with Fahad Yasin. 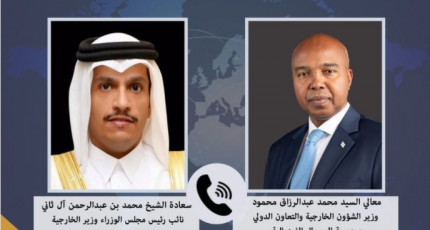 The two top ministers have discussed ways of strengthening bilateral relations and cooperation between the two brotherly countries and the latest regional and international developments.

Somalia asked Qatar, which currently chairs the 155th session of the League of Arab States to raise its situation at the next ministerial meeting to discuss political and security developments.

The out Somali president Mohamed Abdullahi Farmajo and NISA boss Fahad Yasin worked closely with Doha during the past four years and are currently seeking funds for re-election.

The Somali Foreign Minister is making a phone call with the Deputy Prime Minister, the Minister of Foreign Affairs of Qatar.

Qatar has been accused of having a role in the political crisis in Somalia as it supported Fahad Yasin, who plotted Farmajo's attempt to take over power by a bloodless coup this year.