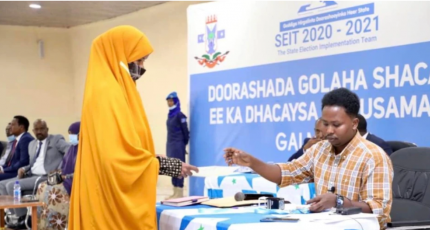 MOGADISHU, Somalia - Somalia's election is marred by extensive corruption, with some candidates vying for parliamentary seats are complaining about the process which is not transparent, free, and fair.

Faduma Adan Jelle, Dr. Mohamed Ahmed Awke, and Dr. Mohamed Aden Jelle, who are in Dhusamareb, Galmudug capital said troops barred them from going outside their residences to run their campaigns.

Galmudug leader Ahmed Qoor-Qoor, who is a former minister in Farmajo administration was accused of locking up some seats for Villa Somalia-backed candidates, including NISA’s acting director Yasin Farey.

The lower house vote which was one year behind the schedule saw a widespread hijack of the seats by the people in power, with the political analysts, say the fraud could lead to chaos in the Horn of Africa nation.

Members of the Union of Candidates, have already warned of the corruption and called on PM Roble to hold an inclusive and credible election in Somalia. The 275-seat house has been the epicenter of the crisis.

On Wednesday, several seats were elected in Mogadishu, and Dhusamareb with former deputy house speaker Mahad Abdalla Awad retained his seat in an easy win. He is a close ally of Farmajo.

The country missed deadlines to hold the election of the president this year due to political disputes over the model of the election. The international community expressed disappointment over the delays.