The appointment comes as the Horn of Africa nation battles its worst political surge and public anger grows over the mysterious death of NISA agent Ikran Tahlil. 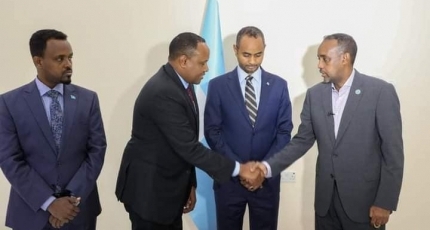 MOGADISHU, Somalia - The new security minister Abdullahi Mohamed Nur has been sworn in on Thursday amid ongoing political wrangling resulted from the dismissal of Fahad Yasin.

The minister who is also a member of the outgoing Somali parliament took his oath of office in front of prime minister Mohamed Hussein Roble in Villa Somalia, according to state media.

Nur replaces Hassan Hundubey Jimala, who was fired by the PM on Wednesday night as the gridlock between outgoing president Mohamed Farmajo and Roble takes a new dimension.

Hundubey, a close ally to Farmajo rejected the PM's decision to fire him as unconstitutional, and the presidency has supported his defense, pushing the situation from bad to worse.

In a Twitter post, the sacked minister described what happened at the security ministry today as a hijacked transfer as he was denied from attending the hand-over cermoney.

The country has been struggling with recurrent political disputes since the end of Farmajo's 4-year term in February 2021 with regional states accused the leader of failing in the elections.

Roble who was appointed last year as PM following the ouster of Hassan Ali Khaire in July by the parliament is now facing challenges over the implementation of the May 27 election deal.