President Hassan Sheikh asked the parliament to approve his new PM as soon as possible to fulfill the work before him like tackling insecurity, drought, climate change, and good relations with all countries. 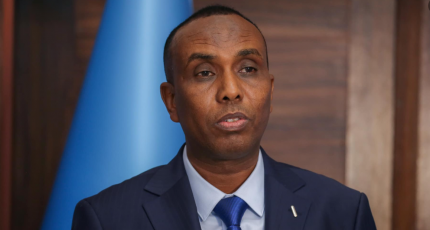 MOGADISHU, Somalia - On Wednesday, June 15, Somalia's President Hassan Sheikh Mohamud picked a lawmaker to become the prime minister of the country one month after his election.

Hamza Abdi Barre, a long-time friend and member of the president's UPD political party will serve as the 21st PM of Somalia. Barre who hails from the Ogaden clan won the top job after a campaign by Jubaland leader Ahmed Madobe, a close ally of Kenya controlling a lucrative port in Kismayo, 500Kms south of the capital Mogadishu.

Speaking to the media at Villa Somalia after Mohamud announced his appointment, the prime minister promised to work day and night to form the best cabinet that is capable of dealing with the crisis in the country, including insecurity, recurrent drought, Al-Shabaab war, and state-building.

The new Prime Minister has said his job will reflect the President's action plan and the election campaign slogan "Somalia at peace with itself and with the world". It's unclear if will deliver on his promises or follow the footsteps of his predecessors.

The President has asked the parliament to approve his new PM as soon as possible to fulfill the work before him like tackling insecurity, drought, climate change, and good relations with all countries.

One of the major issues facing the country and its people is political instability and insecurity, the protracted drought and how to find a lasting solution, and how the long-delayed constitution itself can be reviewed and finalized," said the Prime Minister.

He added that his government will resume the stalled dialogue with Somaliland, the breakaway region in northern Somalia to unite the country and develop the economy, so as to create good jobs for the youth.

Hassan Sheikh who won May 15 election said he has chosen Hamza for his ability, experience, and talent to take the government initiative, build efforts, and the development of national plans.