The senate candidates, including Abdi Hashi and Prof Abdi Ismail Samatar who teaches at a university in the US, addressed the electoral delegates gathered in Afisyoni tent on Tuesday. 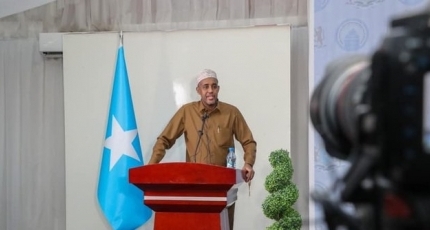 MOGADISHU, Somalia - Somali Prime Minister Mohamed Hussein Roble has delivered a speech at an event at Afisyoni tent, where dozens of candidates running for Senate seats.

The PM lauded the start of the election process for the 11 seats allocated to Somaliland in the Upper House of Somalia's parliament and called for a free, fair, and transparent election.

The senate candidates, including Abdi Hashi and Prof Abdi Ismail Samatar who teaches at a university in the US, addressed the electoral delegates gathered in Afisyoni tent on Tuesday.

"The situation in the country today is going well. We are in an election period. Political disputes come and go away. It is not a big deal," said PM Roble amid a standoff with Farmajo.

He has highlighted the importance of the country's stability, calling on the public to have trust in their government doing at best to hold peaceful elections and degrade Al-Shabaab.

The prime minister also said there were no major challenges that that country is now facing more than the elections and the security which have been marred by internal disputes.

The PM's remarks come days after mediation efforts to fix the differences with the outgoing president Mohamed Abdullahi Farmajo who wants to stay in charge of the absolute power.

Farmajo whose term ended in Feb failed in his responsibility to lead the country to inclusive and universal suffrage. He handed over the election and security tasks to the PM last May.