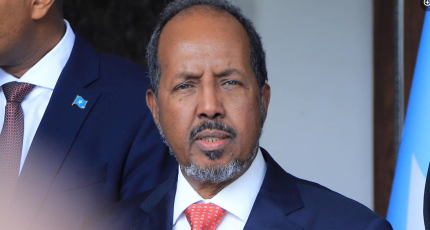 MOGADISHU, Somalia - The President of Somalia Hassan Sheikh Mohamud has spoken about the current humanitarian situation in the country, especially the effects of severe drought.

Speaking at a press conference along with PM Hamza Abdi Barre and regional leaders, Mohamud said the drought is turning into famine in some areas, but we are making great efforts to prevent it.

The President had announced that he rejected a UN call to declare a famine in Somalia to avoid the development efforts in the country would have stopped completely, and he would have turned only to fighting the hunger.

The president has called on the Somali people and the international community to provide urgently enough food aid to 7.8 million people who are on the brink of dying of hunger and malnutrition.

Hassan Sheikh made the appeal at the end of the two-day National Consultative Council meeting held in Villa Somalia, the country's presidential palace to discuss the ongoing crisis in Somalia.

In addition, the head of state said without hesitation that the hunger caused by the drought will be mitigated by the Somali government with the support of its generous people.

Last week, United Nations Relief Chief Martin Griffiths has arrived in Mogadishu, where he met with President Hassan Sheikh before visiting Baidoa, the epicenter of the IPDs fled from severe drought.

After his trip, the UN said famine is standing at the door of Somalia and asked the donors for $1 million to assist the drought-affected people in Somalia. The situation was exacerbated by a lack of enough rain for 4 years.