Puntland said it welcomed more than 3,000 persons who arrived in several towns, mainly Galkayo for the past three days of this month. 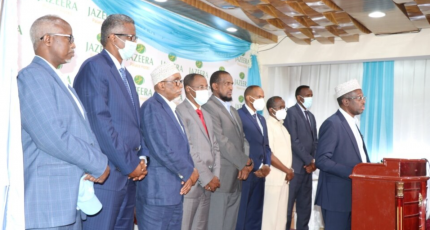 MOGADISHU, Somalia - The Council of Somalia's presidential Candidates added their voice to the growing condemnation of the ongoing forceful evictions in Las'anod of the Sool region.

The opposition alliance which brings together 15 candidates said in a statement that it was "deeply saddened" by the atrocities committed against the people hailing from the south.

The candidates in Mogadishu in a loud voice urged Somaliland to halt the abuses subjected to the non-locals in Las'anod and respect their rights to live in the country without prejudice.

"After having seen disheartening news from Las'anod where Somalis were forcibly displaced, we call on Somaliland to reconsider and stop this action immediately," they said.

The union, meanwhile asked the Muslim clerics, traditional elders, scholars, and intellectuals to intervene in the situation and help stop the targeted eviction of the Somali people.