Somaliland treats southerners like foreigners, evicted them from Las Anod

The northern breakaway region has attributed the insecurity incidents to the people from the south of Somalia. 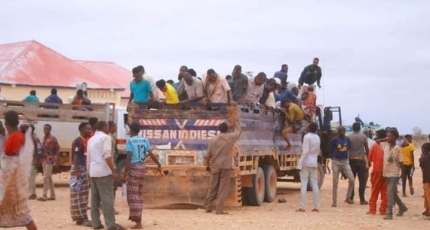 LAS ANOD, Somalia - Nearly 800 Somali people were forcibly deported as foreigners from Las Anod, the capital of the Sool region in the north of the Horn of Africa country by Somaliland.

The current Somali government has strongly condemned the forced eviction, which goes against the humanity and rights of the citizens to live freely and peacefully in the homeland.

Somaliland has accused the southerners of the insecurity of the city, an allegation that former PM described as politically motivated deportation which will cause negative consequences.

"The forced eviction displayed in Lascanood will mark a very low point both morally and politically for Somaliland. Wrongfully accusing a community of the circumstances surrounding the city will neither produce the stability intended nor tackle the underlying political dynamics," ex-PM Omar Abdirashid tweeted.

Trucks loaded with 750 people, among them, women and young children arrived in the central town of Galkayo, where Puntland officials received them on Sunday with plight on their faces.

Somaliland took the step in the face of strong criticism days after delegates from the northern regions elected 11 senators to represent the self-declared republic in the Federal Parliament.

Somaliland argues that the deported people were non-locals and they were treated like other foreigners in its territory. The people of Somalia have expressed outrage at the statement.