Somalis Are Going Hungry. Their Government Isn’t Calling It a Famine.

But Mr. Abdishakur, the envoy, defended the government’s military operation, saying Al Shabab was contributing to the suffering by blowing up wells and extorting and taxing civilians. 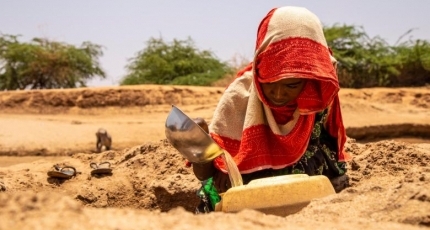 NAIROBI, Kenya — A severely malnourished child is admitted to a clinic in Somalia on average every minute of every day. With crops and animals decimated in the worst drought to blanket the nation in four decades, millions of Somalis stand on the brink of starvation in an unprecedented humanitarian catastrophe.

Despite the crisis, the Somali government has for months been reluctant to declare that the country faces a famine, according to interviews with government officials, aid workers, and analysts familiar with internal government discussions.

Such an announcement, aid workers said, would allow far more aid to flow — as happened during a 2011 famine — and muster the attention of Western donors who are currently more focused on responding to the fallout from the war in Ukraine.

The government of President Hassan Sheikh Mohamud, which came to power in May, has resisted the designation for a variety of reasons. First and foremost, the fledgling government fears it would undermine the public good will it now enjoys and play into the hands of the terrorist group Al Shabab, just as the military has launched a large-scale offensive against the insurgents, who have plagued the country for decades and are still launching devastating attacks.

The Somali government also worries that a famine declaration would spur an exodus of people from affected areas into major cities and towns, stretching already meager resources and fueling a rise in crime.

And they are concerned that a declaration of famine would deter investors and shift international aid money toward the emergency response — instead of long-term development money to fund health care, education, and climate resilience programs.

The president acknowledged the dilemma in September, saying, “The risk is very high to announce a famine.”

Such a declaration, he said, “does not affect the famine victims only, but halts the development and changes the perspectives and everything.”

Over the past several weeks, frustrated aid workers have insisted the threshold for famine has already been reached in some areas and have pushed the government in several meetings to declare a famine to bring attention to the crisis.

The hunger emergency is affecting not only Somalia, which has a population of 16 million but an estimated 37 million people in the Horn of Africa. One of the main drivers of the crisis is climate change, which is the focus of the climate summit known as COP27, starting on Sunday in Egypt.

Aid workers in Somalia fear a repeat of what happened in 2011 when more than half the nearly 260,000 people who died in the famine did so before it was officially declared.

“The government is afraid of the F-word — famine, that is,” said an aid worker who spoke on the condition of anonymity to discuss sensitive matters. “But the situation is catastrophic and the longer they wait, the worse it gets.”

Abdirahman Abdishakur, the president’s envoy for drought response, acknowledged that aid agencies had been pushing the government to declare a famine but denied that the government was hesitant to do so. He said there was no concrete evidence the thresholds for such a crisis had been passed. He also said rich nations should honor their commitments to help poor nations like Somalia deal with the effects of the climate crisis.

“The issue is not paying charity or giving out to Somalia,” Mr. Abdishakur, who has been touring Western capitals to raise awareness of the situation, said in a phone interview. “It is also about justice.”

An expert group that assesses famine conditions has made a determination on Somalia but has not declared a famine.

A famine can be designated if 20 percent of households in an area face an extreme lack of food if 30 percent of children there are suffering from acute malnutrition, and if two adults or four children out of every 10,000 are dying every day from starvation. While experts can classify a famine and humanitarian organizations can warn of it, the decision to eventually declare a famine lies with a country’s government and U.N. agencies.

By pushing back against a famine declaration, Somali officials aim to buy time, and hope that much-needed funding will ultimately materialize anyway, said Mohamed Husein Gaas, the director of the Raad Peace Research Institute in Mogadishu, the capital.

“But that is not a good policy,” Mr. Gaas said. “We need to move fast and save lives.”

Nimo Hassan, the director of the Somali Nongovernmental Organizations Consortium, said technical definitions of famine shouldn’t be an excuse for inaction.

“The situation is outpacing the resources, and you are trying to drip-feed somebody who needs to drink water quickly,” she added.

The last review of Somalia’s situation, published in September, projected that famine would occur in two districts in the southern Bay region between October and December, and that the severe drought conditions would persist into early next year.

In severely impacted areas in Somalia, famine could soon be declared. Experts with the United Nations have just finished collecting data on the drought situation and are currently analyzing it before publishing their results in mid-November — a move that could spur authorities to make a formal famine declaration.

Almost a million Somalis live in inaccessible areas — including under the authority of Al Shabab — and those who conducted the review estimated that conditions there were similar to, if not worse than, areas where data was collected.

The Shabab’s control of vast areas of southern Somalia exacerbated the 2011 famine, and in late October, the United Nations implored the group to allow aid agencies unfettered access to help drought-stricken Somalis.

Aid agencies say that since September, when the United Nations said that famine was “at the door” in Somalia, international funding has increased, particularly from the United States. But experts said that fund-raising efforts aren’t growing as fast as needed and that donors should have responded to last year’s early warnings to prevent large-scale deaths and displacement now.

“The question we should all be asking ourselves is about the extent of the loss of human life, not whether we are an inch short or an inch over some thresholds,” said Daniel Maxwell, a professor of food security at Tufts University and a member of Somalia’s Famine Review Committee. “The calls to respond now are as clear as they are ever going to be.”

Crop failures, supply disruptions from the pandemic and the effects of Russia’s invasion of Ukraine have more than tripled the cost of some staple foods in some areas. And because the drought has lasted longer and affected more people and areas than in 2011, experts also worry that more people could die over time.

Across Somalia, clinics and hospitals treating malnourished children are reporting double or triple the number of cases compared with last year, even as the price of the peanut-based paste used to fight malnutrition has increased by 23 percent, according to the U.N. children’s agency. More than half a million children are at risk of death, the United Nations has warned, “a pending nightmare” unlike any seen this century.

As the drought tightens its grip on Somalia, the authorities have also declared an all-out war on Al Shabab with the backing of local clan militias. Some critics say that the authorities should have focused on saving lives first and that the latest offensive will only create more displacement.

But Mr. Abdishakur, the envoy, defended the government’s military operation, saying Al Shabab was contributing to the suffering by blowing up wells and extorting and taxing civilians.

For now, aid workers say they are racing against time so that more Somalis do not die on their watch as they did in 2011.