Southwest state completes election for its seats in Senate 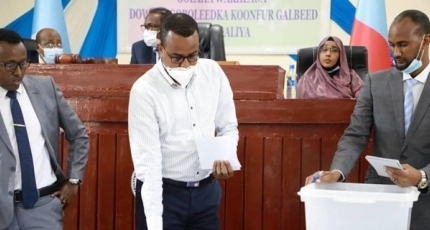 BAIDOA, Somalia – The lawmakers of Somalia’s Southwest State have on Sunday voted for the remaining three seats in the Federal Parliament following an indirect election.

Six candidates have contested for the Senate seats, including current Somali defense minister Hassan Hussein Haji, who is a close ally to the outgoing president Farmajo.

Haji easily won the first seat after defeating his rival contender Abdirahman Mohamed with 74 to 14 votes cast by the state lawmakers in a show of hand. Three votes spoiled.

Abdiweli Mohamed and Abdullahi Robow Mohamed contested the last third seat and was won by Ibrahim with 68 votes. while Mohamed got 18, and 2 votes were reportedly spoiled.

Southwest concluded the election process of the 8 Senators representing the State in the Upper House, becoming the 2nd to do so after Puntland in northeastern Somalia.

The region has eight seats in the Senate that will represent its interest in the Federal Government of Somalia which has a 54-seat Senate and a 275-seat Lower House.

The opposition says the ongoing elections are marred by irregularities, favoritism, and inference by the outgoing president Farmajo who is seeking re-election on Oct 10, 2021.