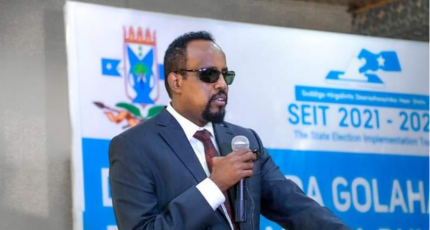 MOGADISHU, Somalia – Abdullahi Kulane, a senior Somali intelligence official who has committed serious crimes was elected as a member of parliament on Monday in Dhusamareb, Galmudug state.

Kulane who is a close relative of the outgoing president Mohamed Abdullahi Farmajo won HoP#40 seat in the Lower House without competition after his rival sole candidate dropped out of the race.

He is a top intelligence official accused of killing Ikran Tahlil, a female cyber security expert who worked for NISA for four years before being abducted last year and subsequently murdered within the agency.

All NISA officials accused of Ikran Tahlil’s murder are becoming lawmakers to escape from prosecution in the future as Farmajo’s time in Villa Somalia is running out, awaiting his successor to take over from him.

Somalia is picking 275 Lower House seats that will join the 54-member Senate in the election of a new president this year. The vote saw repeated delays due to the political crisis and Farmajo’s coup attempts.