Standoff on Gedo seats brews as election moved to El-Wak

Both PM Roble and Jubaland leader welcomed FEIT statement on the relocation of the election. 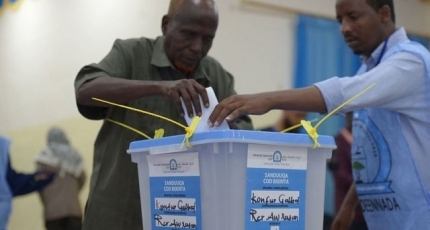 MOGADISHU, Somalia - Somalia has on Thursday sworn in its 11th parliament in the capital, Mogadishu after delays that risked the country's state building process.

Despite this milestone, there are unresolved issues related to the parliamentary election, including a dispute over 16 seats in Gedo region.

The election in the second Jubaland constituency - Garbaharey saw worst crisis after Farmajo and Ahmed Madobe disagreed who will control with each planned to produce own MPs.

On Thursday, shortly after more 250 lawmakers were sworn in, FEIT announced Garbaharey election was moved to El-Wak, a town under Madobe control.

The people in Gedo have previously rejected the relocation, saying the change of the voting district clearly violates the Sep 17 election deal.

Farmajo has power and influence in the region as it is his constituency. He deployed special forces from elite Gorgor forces last year to drive out Madobe's troops from the region.

However, it's unclear if Gedo authorities will accept FEIT decision to move the election of their seats to El-Wak that will facilitate Madobe to hijack the process and pick loyal MPs.

If this plan succeeds, it will deal a major blow on Farmajo who is a candidate vying for second after his mandate expired in Feb 8.