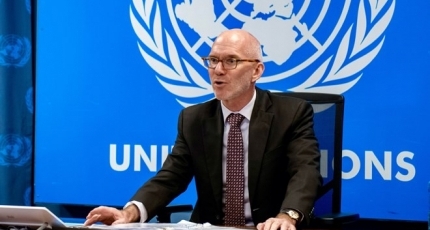 MOGADISHU, Somalia - James Swan has briefed the UN Security Council on the continuing delays in Somalia's election and how it has impacted the security and economic sectors.

The Special Representative of the UN Secretary-General for Somalia said the political crisis in the country has led to the current constitutional vacuum in the Horn of Africa nation.

The envoy shared his concerns with the UNSC that the off-and-on parliamentary election could not be completed before the end of this year that would fuel the uncertainty situation.

He welcomed the completion of the three-month electoral process for the 54 Upper House seats of which 14 are women. But the UN envoy is pessimistic about the Lower House vote.

James Swan, who briefed the UN Security Council on the situation in Somalia on Wednesday, said he appreciated the ongoing efforts to move the parliamentary elections forward.

Swan was accompanied in the virtual briefing by the AU envoy for Somalia Francisco Madeira, and Ms. Asha Siyad, who is campaigning for a 30 percent quota for women in the elections.

Swan says progress has been made in Somalia's electoral process, albeit at a slow pace. He said the Federal and State leaders are slow in the process due to a lack of commitment.

The remarks of the UN envoy come as Somali PM Mohamed Hussein Roble is working on how the election of the 275-seat Lower House could be finalized in December of this year.