The standoff between the term-ended Somali president Mohamed Abdullahi Farmajo and PM Roble emerged early this month after the dismissal of NISA chief Fahad Yasin. 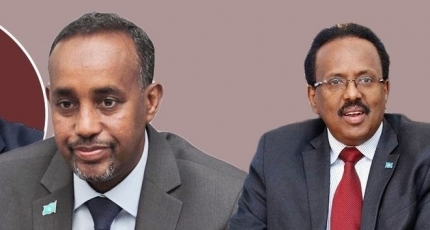 MOGADISHU, Somalia - No breakthrough on the standoff in Somalia emerged from the latest mediated talks between outgoing president Farmajo and PM Roble on Saturday in Mogadishu.

The hours-long meeting failed to result in an agreement on Ikran Tahlil's case and leadership of the NISA after both leaders disagreed on who will lead the embattled intelligence agency.

According to sources, Farmajo refused to allow Tahlil's case to be independently investigated and end it up at the relevant courts in the country to answer the family's calls for justice.

The outgoing president also opposed the appointment of Major General Bashir Goobe by PM Roble as the acting director of the National Intelligence and Security Agency, replacing Fahad.

The leaders of Galmudug and Southwest states Ahmed Abdi Karie [Qoor-Qoor] and Abdulaziz Lafta-Gareen respectively are mediating between the two leaders to end their differences.