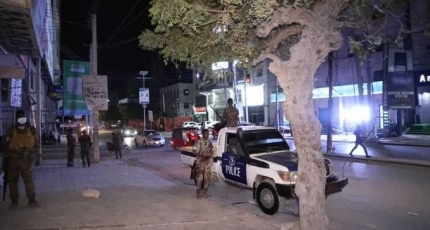 MOGADISHU, Somalia – Mogadishu has witnessed another night of unrest following the flare-up of anti-government protests in the main parts of the seaside capital, which suffered bloody conflict in the past.

In solidarity with the besieged police boss, several MPs, including Mahad Salad and Abdirahman Odowa have rushed to the scene and held a press conference condemning Farmajo for reigniting the civil war.

In a press conference, the lawmakers said Farmajo will solely shoulder the responsivity for any carnage resulted from the conflict he is fueling in the Somali capital, warning security forces to attack Sadak John.

Hundreds of people took to the streets after the news of the impending attack on the police officer surfaced with the demonstrators calling the president a dictator and shouting “We don’t want Farmajo”.

The outgoing Somali president Mohamed Abdullahi Farmajo who is clinging to power after his mandate expired last February was reported to be planning to arrest the former police chief to end dissent voices.

Farmajo’s attempts to stay in power beyond his mandate made the situation from bad to worse as the powerful political leaders in Mogadishu began to relocate to their clan strongholds to mobilize forces.

The turmoil continued to escalate since the Lower House has extended the president’s previous mandate by two more years last Monday, April 12, a move the Upper House termed as unconstitutional.

In a TV interview, Farmajo announced that the Sep 17 election deal with the regional states is null and void following the Lower House the term extension vote, in another step towards a dictatorship.