Tension rises in Mogadishu ahead of planned opposition protests

CPC's spokesman Dahir Mohamud Guelleh told the local reporters in the capital that the rally will take place as scheduled on the 26th February, warning the government against blocking the public uprising. 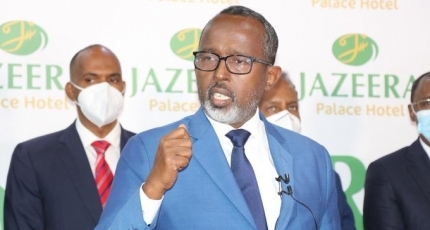 MOGADISHU, Somalia - The Somali government has restated the ban on public gatherings as part of the country's coronavirus disease (COVID-19) mitigation measures ahead of planned opposition protests.

The Council of the Presidential candidates [CPC] said this week they will hold a large demonstration next Friday in Mogadishu, especially in the Daljirka Dahson to voice their views on the delayed election.

CPC's spokesman Dahir Mohamud Guelleh told the local reporters in the capital that the rally will take place as scheduled on the 26th February, warning the government against blocking the public uprising.

Guelleh added that the Federal Government of Somalia had no mandate to rule the country and failed to hold timely and inclusive elections in the country that led to the current political crisis and tensions.

It is unclear whether the march will go ahead in defiance of government restrictions.

The opposition alliance made up of 15 presidential candidates led by former leaders Hassan Sheikh and Sheikh Sharif said Farmajo had ordered the suspension but would not comply with an unconstitutional order.

There is heavy security presence in the streets and transport disruptions are likely on Friday around planned demonstration sites, with any unauthorized gatherings likely to be dispersed by security forces.

KON received reports that the opposition is collecting weapons and mobilizing soldiers in northern Mogadishu, in what appears that they are prepared for war if their protests are disrupted.

Last Friday, 19th February at least five people were killed and dozens wounded after clashes erupted in Mogadishu during opposition protest and the violence led to the suspension of all flights at the airport after being hit by several mortar shells.