An event to sign election deal underway in Mogadishu

It's unsure whether the outgoing leader, Mohamed Abdullahi Farmajo will be participating in the ceremony as he is lacking immunity. 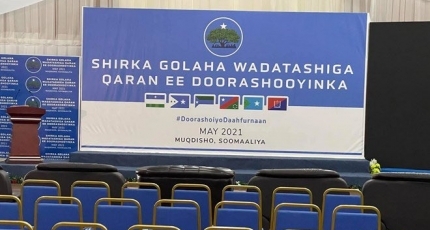 MOGADISHU, Somalia -- Today will be the closing day of the four-days election conference that was going in Afisyoni Camp in the capital Mogadishu with crucial agreements reached to put an end to the deadlock surrounding the country’s upcoming election.

The regional state leaders and the acting PM, Rooble along with the Mayor of Mogadishu engaged in long-day discussions that took days to come to end with the press forbidden access to the conference as the spokesperson of the OPM has been sharing the developments of the election with the public.

It's certain that there are still long ways to go with many issues divided over even when the agreements become formal.

The politicians from the northern part of the country denounced the outcome of the conference in a statement they released with the people of the Gedo region invalidating the discussion rejecting Madobe to be in a position to represent them in the process of the election and their fate.

The closing ceremony was invited to the former Presidents of Somalia, members of the opposition candidates, civil society groups, and guests of honor including the international diplomats and representatives.

It's unsure whether the outgoing leader, Mohamed Abdullahi Farmajo will be participating in the ceremony as he is lacking immunity.

He previously failed to ensure holding the general election and otherwise created unrest and distrust.