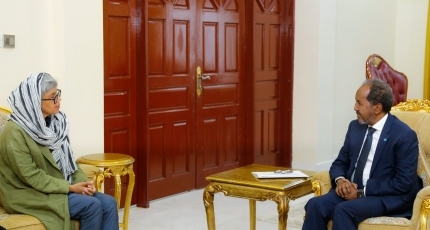 MOGADISHU, Somalia – EU’s special envoy to the Horn of Africa Annette Weber arrived in Mogadishu airport on Wednesday for the first time such a top European Union official visits Somalia in 32 years.

Weber said her visit was to show solidarity with the new president Hassan Sheikh Mohamud and to pledge continued EU support as his government faces the daunting task to resolve outstanding issues.

The head of the EU mission in Somalia Tiina Intelmann was in attendance at the talks at Villa Somalia, accompanying Weber’s delegation which left the country after hours due to security concerns.

During his election campaign, Mohamud promised “a peaceful Somalia at peace with the world”.

The EU remained an important partner in the national reforms, economic recovery and sustainable development, according to Somalia’s finance minister Abdirahman Duale Beileh.

The visiting EU official has assured president Hassan Sheikh of reliable assistance to deliver on his promises to stabilize Somalia, rebuild the army, finalize the debt relief process and defeat Al-Shabaab.

Mohamud, an academic replaced Farmajo whose presidency was marked by corruption scandals and political turmoil after staying in office beyond his four-year mandate which expired in February 2021.

The political analysts say President Hassan Sheikh Mohamud who became the first leader to return to power has a lot of work to do to clean up Farmajo's five-year mess in the war-torn country.