The talks centered on key issues, including the finalization of the electoral process, the security, and the women's representation in the parliament. 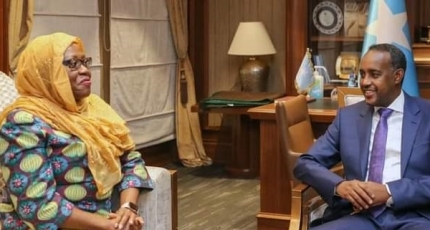 MOGADISHU, Somalia - The prime minister of Somalia Mohamed Hussein Roble has on Monday held a meeting with a top UN delegation visiting the country.

The delegation led by the Assistant Secretary-General of the United Nations for Africa Martha Ama Akyaa Pobee arrived in the capital for talks with Somali officials on the current situation.

According to a statement by the office of the PM [OPM], Roble and Pobee held a meeting in Villa Somalia in which they focused on a range of issues, including the election and security.

The UN official urged the PM to ensure a minimum 30 percent women's quota in Somalia's parliament, which is a national action plan on women that was part of the May 27 poll deal.

Also, among the matters discussed include the mandate of the AU Mission in Somalia (AMISOM), UN development projects, and the cooperation between the country and the UN.

The visit by the UN official comes days after Somalia ordered the deputy AU envoy Simon Mulongo to leave Somalia within 7 days for overstepping his mandate to work in the country.

The Ugandan diplomat has been an obstacle to the AMISOM exit plan and Somalia’s security strategy for months, according to the country’s ministry of foreign affairs. He denies charges.