The UN's envoy for Somalia James Swan attended the meeting at Villa Somalia between Farmajo and the visiting delegation. 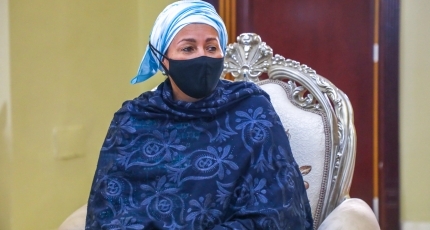 The delegation headed by Amina Jane Mohammed is a Nigerian diplomat who is serving as the fifth Deputy Secretary-General of the United Nations held talks with Farmajo upon arrival.

During the meeting at Villa Somalia, Farmajo shared the govt's gains in various sectors, attainment of SDGs, and readiness for peaceful, inclusive, and timely parliamentary elections.

Ms. Amina hailed the government's commitment to elections and security as well as the women's rights for the much-talked 30% representations in the upcoming Somali federal parliament.

The two sides have further deliberated the reinforcement of UN and Somalia development cooperation, according to a statement from the presidency, obtained by Keydmedia English.

The visiting UN top official also held a meeting with Somali PM Mohamed Hussein along with the heads of the regional states, in which they focused on elections, political developments, challenges, and way forward 4 conducting credible elections leading to peaceful & legitimate transition of power.

The visit by Amina comes as the fallout between the top leaders in Somalia is worsening after Saturday's mediated meeting ended in failure, signaling there is no swift solution in sight.