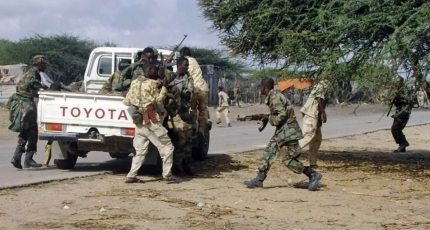 AFMADOW, Somalia - Heavily armed fighters belonging to Al-Shabaab have invaded Afmadow under Jubaland state to wreak havoc in the city, but regional troops repelled the attack successfully following a gunfight.

At least one Jubaland's Darwish soldier was reportedly killed and several wounded in the overnight terrorist assault that comes amid intensified military operations against Al-Shabaab in parts of south and central Somalia.

The local security officials have confirmed that the repelling of the attack by troops led to the killing of many terrorists while many others escaped with gunshot wounds to the Al-Shabaab-held rural areas.

"The terrorists were overwhelmed by our gallant troops in Afmadow town and they have suffered irretrievable losses during the gun battle," said Jubaland army officer, who spoke to Keydmedia English by phone on condition of anonymity.

He added that the situation has returned to normal on Tuesday morning with the Jubaland forces conducting a cleanup operation on the outskirts of the city to ensure security and push back Al-Shabaab fighters who were on the run after encountering stiff resistance.

Seizing Afmadow is a crucial step in the Al-Shabaab drive towards the southern Somali port city of Kismayo which now serves as the interim seat of the Jubaland administration led by Ahmed Madobe, a key ally of Kenya in Somalia.

The town which was liberated from Al Shabaab by Kenyan and Somali forces in May 2012 is located just about 620 km away from Mogadishu, the Somali capital.

Since losing more ground, including the capital from 2011 up to now, Al-Shabaab has posed enormous security, humanitarian, and governance challenges in the Horn of Africa country that has been beset by three decades of conflict.