The U.N. and Türkiye brokered separate deals with Russia and Ukraine in July to ensure Africa, the Middle East and parts of Asia would receive grain and other food from the Black Sea region during Russia’s war in Ukraine. 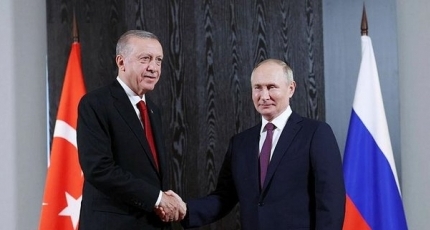 “In my phone call with (Russian President) Vladimir Putin, he said, ‘Let’s send this grain to countries such as Djibouti, Somalia, and Sudan for free – and we agreed,” Erdoğan said in his speech during the MÜSIAD EXPO in Istanbul.

The comment came after Russia on Wednesday resumed its participation in the United Nations and Türkiye-brokered grain agreement, ending four days of non-cooperation that still saw exports continue from Ukrainian ports.

Moscow’s U-turn on the pact that allowed the shipment of vital Ukrainian grains that stalled after Russia launched its invasion on Feb. 24 followed Erdoğan’s call with Putin on Tuesday.

Putin said even if Russia withdrew from the deal again, it would substitute the entire volume of grain destined for the “poorest countries” for free from its own stocks and noted that it would not impede shipments of grain from Ukraine to Türkiye.

Putin praised Türkiye’s mediation efforts to get the deal back on track, as well as Erdoğan’s “neutrality in the conflict as a whole” and his efforts at “ensuring the interest of the poorest countries.”

Erdoğan on Friday warned of the severity of food shortages and urged for solid steps for grain and fertilizers to be sent to underdeveloped countries, particularly Africa.

This is also in line with Russia’s concerns that most of the grain exported since the deal was reached was ending up in richer nations.

“No effort is being made to end these tragedies,” Erdoğan stressed. “We will ensure that grain ships reach all countries in need, especially Somalia, Djibouti, and Sudan, which are struggling with serious food crises and famine.”

He also cited his phone call with U.N. Secretary-General Antonio Guterres on Thursday, during which he said this issue should be discussed in an extensive manner at the upcoming G-20 summit in Bali, Indonesia.

“Let’s bring this up at the G-20, what are we going to do in the world, with this war between Russia and Ukraine, will we send this grain and fertilizer to developed countries, or will we send it to underdeveloped poor countries,” Erdoğan said, referring to his remarks during the call with Guterres.

The U.N. and Türkiye brokered separate deals with Russia and Ukraine in July to ensure Africa, the Middle East and parts of Asia would receive grain and other food from the Black Sea region during Russia’s war in Ukraine.

On Thursday, Ukrainian President Volodymyr Zelenskyy said his country would not take part in the G-20 if Putin attends. The Russian leader is yet to confirm whether he will or not.

About 10 million metric tons of grain and other foodstuffs have left Ukraine since the deal in July restarted shipments, Guterres said Thursday, as he pushed Moscow and Kyiv to extend the pact that is vital to “reducing the risk of hunger” worldwide.

Ukraine and Russia are major global exporters of wheat, barley, sunflower oil, and other food to developing countries. A loss of those supplies before the grain deal had pushed up global food prices, led to soaring energy costs, and helped push tens of millions into poverty.

“The Black Sea Grain Initiative is making a difference,” Guterres told reporters. “As of today, 10 million metric tons of grain and other foodstuffs have been shipped through the Black Sea corridor. It has taken just three months to reach this milestone.”

The G-7 also wants Russia to prolong the deal, a senior U.S. State Department official said on Friday at talks in Germany.

“Everyone agreed on the need to extend the Black Sea grain initiative,” the official said.

The G-7’s top diplomats are in the western German city of Muenster for two days of talks, with the war in Ukraine at the top of the agenda.

German Chancellor Olaf Scholz on Friday separately also called on Putin to prolong the pact to avert a hunger crisis.

“I urge the Russian president not to refuse to extend the grain agreement, which ends in a few days,” Scholz told reporters on a visit to Beijing. “Hunger must not be used as a weapon.”

“I appeal to all parties to concentrate efforts in two areas. First, renewal and full implementation of the Black Sea Initiative. Second, removing the remaining obstacles to the exports of Russian food and fertilizer,” Gutteres said Thursday.

“Over the past few days, I believe the world has come to understand and appreciate the importance of the Black Sea Grain Initiative,” he said. “For stemming the food crisis. For easing prices and pressures on people around the world. For reducing the risks of hunger, poverty, and instability.”

The deal also aims to facilitate exports of Russian grain and fertilizer exports. Guterres said that concerted efforts were needed to urgently address the global fertilizer market crunch, urging the full use of Russian export capacity essential for that purpose.

“High fertilizer prices are already affecting farmers around the world. We cannot allow global fertilizer accessibility problems to morph into a global food shortage,” he said.