The user's latest TikTok video posted a couple of days ago, featured reactions from other platform users, as well as internet trolls, complaining about the money being torn up. 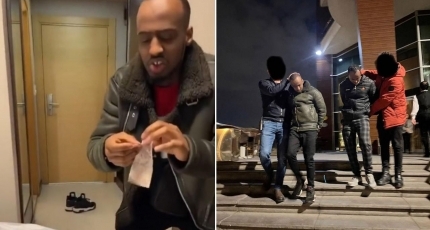 ANKARA -  Police in Ankara, Turkey announced on Wednesday that two Finnish citizens had been arrested after they shared a video on the social media platform TikTok.

In a brief notice on Twitter, the Ankara Police Department said that the shared video showed the pair tearing up Turkish banknotes, adding that authorities have initiated "legal measures."

Turkish police noted that the detained Finnish citizens were born in Somalia and that they were in Turkey to take part in an Erasmus student exchange program.

As of around noon on Wednesday, the Finnish embassy in Ankara had not been able to confirm that the pair were arrested, according to Finnish news agency STT.

The Turkish news agency DHA shared the TikTok video that prompted the arrests on its website. The clip appears to show a young man throwing and tearing up the Turkish lira.

"Look, look, look! This is not money, no," the man said in English, tearing up a banknote.

The video has since been deleted from the TikTok user's account. Turkish police allege that the video was posted on 9 November. The user's account also features videos of him speaking in Finnish.

The user's latest TikTok video posted a couple of days ago, featured reactions from other platform users, as well as internet trolls, complaining about the money being torn up.

"Who do you think you are? You can tear up our money?! If someone else did the same, you would call them racist. You should be considerate," one commenter said.

It is not unusual for Turkish police to arrest people for posts made on social media, and such cases are known to result in jail terms. According to a new law in the country, those convicted of spreading false information can face up to three years in prison.

However, it remained unclear on Wednesday afternoon what charges the pair may face, or if they will be charged with anything at all. They could face deportation from Turkey, as is often the case with foreign detainees.