Hundreds of families fled from their houses in the Gulf of Aden city during the heavy clashes between rival units within Puntland security forces. 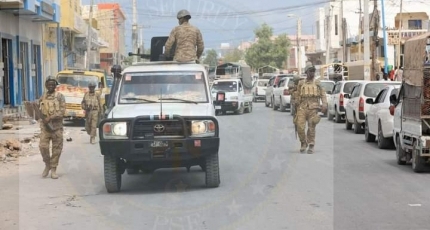 The situation in Bossaso is calm today but unpredictable as sporadic gunfire can be heard from the areas where Tuesday's fighting took place, according to the sources within the PSF.

There are great fears that the battle could resume at any time due to the reinforcements that both sides are receiving from outside. Businesses and public transport came to a standstill.

Meanwhile, the minister of security in Puntland Abdisamad Gallan held a press conference in Garowe on Wednesday, announcing a unilateral ceasefire in Bossaso after suffering losses.

Puntland president Said Abdullahi Deni has previously turned down mediation by the elders to avoid conflict in the port city. He vowed to eject the PSF boss from the office by force.

At the moment, the situation is out of hand and hundreds of families fled from their houses in the Gulf of Aden city during the heavy clashes between rival units within Puntland forces.

Bossaso, which is the main economic source of Puntland has been facing double threats from Al-Shabaab and ISIS based in the Bari mountains. The current war exacerbates the situation.

Amid ceasefire offer, the renegade former PSF boss Mohamud Osman Diyano said today in a statement on the Bossaso clashes, saying his forces are in defense against the Deni troops.