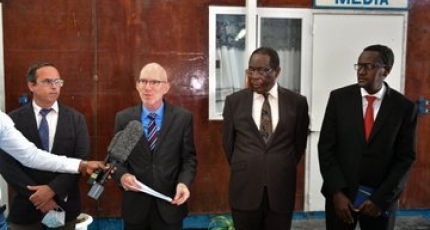 MOGADISHU, Somalia - The UN special representative for Somalia James Swan and AU envoy Francisco Madeira have attended the first day of the election for Somaliland senators.

Their attendance was in a show of solidarity with the Somalis from the north electing their senators, according to a statement released by the UN assistance mission in Somalia (UNSOM).

Speaking to the reporters in the polling station at Afisyoni in the airport facility, Swan urged the Federal States to complete the remaining Senate seats immediately as time is running out.

He asked the regional and federal leaders to shift focus to preparations for the Lower House election, which is the most difficult and time-consuming vote in the country due to the disputes.

Somalia's parliamentary and presidential elections were set to take place in early 2021 but postponed thrice after the country entered a new power struggle resulted from the Ikran Tahlil case.

So far, the regional parliaments have elected dozens of senators to the 54-member Upper House with Jubaland and Galmudug states still to finalize the election for six remaining seats.

In his Sep 18 brief to the UN security council, Swan voiced concerns about the ongoing political standoff between Farmajo and PM Roble and its impact on the electoral process.

Following his attempted power grab in April, the opposition candidates have been accusing Farmajo of being the main obstacle to the election after creating political conflict in Somalia.