Turner said the WFP is now reaching more than double the numbers of vulnerable people with aid that it reached earlier this year. She said food assistance alone will not prevent loss of life. 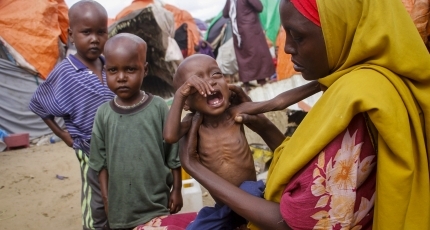 GENEVA — The World Food Program warned Friday it is only a matter of time before Somalia is hit with a full-blown famine and people start dying in droves.

The United Nations food agency said it has been able to keep famine at bay in Somalia by massively increasing food assistance to millions of acutely hungry people.

Speaking from the Somali capital, Mogadishu, she said the WFP is delivering food and nutrition support to record numbers of people. She said beneficiaries include half a million malnourished children and mothers with malnutrition treatment services.

She said the increased food aid so far has prevented Somalia’s hunger crisis from reaching a point of no return. However, she warned Somalia is not yet out of danger.

“We are in a desperate race against time,” she said. “As we discussed a month ago if the situation continues to worsen, we are expecting that it will because we are currently in the rainy season, and we have not seen the rains materialize. Or the relief assistance does not continue to increase to meet the growing needs, then the famine is projected before the end of this year.”

The U.N. predicts famine is likely in the Baidoa and Burhakaba districts of the country’s Bay region. It forecasts up to 6.7 million people across the country will face crisis-level food insecurity before the end of the year.

Turner said the WFP is now reaching more than double the numbers of vulnerable people with aid that it reached earlier this year. She said food assistance alone will not prevent loss of life.

“Disease, poor hygiene, dehydration — they are all equally concerning,” she said. “We work very closely on an integrated response to make sure that sanitation, water access, and health services are also included in what we are doing so that we can address the drivers of mortality.”

Turner said in her 20-year humanitarian career she has never experienced a looming catastrophe of such proportions. She called soaring malnutrition rates horrifying, saying severely acutely malnourished children are at particular risk of dying from hunger and disease.

The World Health Organization reports half of Somalia’s children, some 1.8 million, are suffering from this condition.