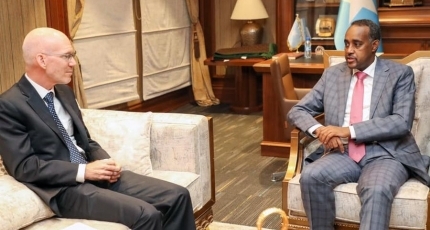 According to the PM's office, Swan urged leaders of the Federal Government and the Federal Member States to work around the clock to finalize the long-delayed parliamentary vote.

The UN envoy shared the international partners' concerns over the endless delays with Roble during Sunday's talks at Villa Somalia. Somalia was set to elect a new president on Oct 10.

Due to the cycles of the political crisis in Somalia, the leaders failed to respect Sep 17 and May 27 electoral deals reached in Mogadishu that plunged the country into future uncertainty.

The PM who is spearheading the electoral process faced challenges in holding a timely and inclusive election after the government fell short of its commitment to resolve the disputes.

The Senate election which began in July this year has not yet been completed with two seats remaining unelected in Galmudug state. The Lower House vote is set to kick off this month.

The process will end with the election of a new president by the MPs of the two houses of the parliament [275 Lower House and 54 Upper House] in an indirect ballot in Mogadishu.

The international community wants the election in Somalia which was delayed three times this year to be finalized before the end of 2021. It's not clear if the national leaders will succeed in this as many main issues, including the funds and security remained unresolved.