She held meetings with Farmajo, PM Roble, and members of Somali women's groups in an effort to know more on the ground during a political crisis. 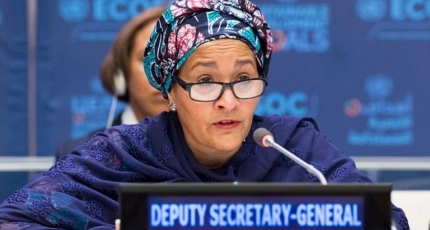 MOGADISHU, Somalia - The Deputy Secretary-General of the UN Amina Jane Mohamed who arrived in the Somali capital, Mogadishu on Sunday continues to meet with local leaders.

Sources disclosed to Keydmedia English that the UN official is expected to hold head-to-head talks with the union of the presidential candidates in an attempt to seek an end to the crisis.

This comes a day after a busy schedule of talks with the outgoing president Farmajo and PM Roble as well the leaders of the five Federal States that focused on the troubled elections.

The stance of the opposition candidates on the dispute between Farmajo and Roble has been clear as they showed support for the PM in his efforts to hold inclusive polls in Somalia.

They also condemned Farmajo's plots to delay the electoral process and obstruct an independent and transparent investigation into the murder of NISA's senior agent Ikran Tahlil.

Ms. Amina said the UN is extremely worried about the escalating political tension in Somalia an called on all sides to put aside their differences and work together in the elections.