In Ethiopia, Concern’s activities include cash transfers, water trucking, rehabilitation of boreholes and latrines, water and sanitation, the distribution of food and non-food items, and treatment of malnutrition. 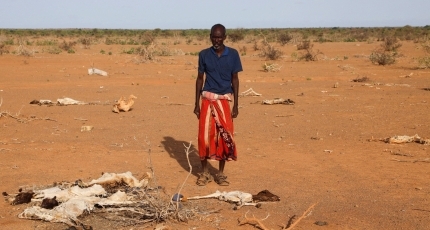 MOGADISHU, Somalia - Concern’s team in Somalia has warned that international donors must urgently provide funding to enable humanitarian organisations to scale up their response to prevent the current drought from deteriorating into a famine with the loss of hundreds of thousands of lives.

“The waiting game must stop now,” Concern’s regional director for the Horn of Africa, Amina Abdulla, said following last week’s decision that conditions had not deteriorated to levels that meet the thresholds required for the declaration of famine in parts of south central Somalia.

“Concern has an experienced, expert team on the ground and we are scaling up our response, but we need the resources to help all those effected equally if we are to contain the situation,” she said. Concern is providing support in the areas of food security and livelihoods, health and nutrition, water, sanitation and hygiene.

Already the indications are that the deteriorating situation could result in a famine that is worse than the 2011 famine in which at least 260,000 people died.

“In 2011 there were 13 million people in need of food assistance in the Horn of Africa, while currently there are 24 million,” Ms Abdulla said. “We also need to look at the duration of the current drought, with some areas not receiving rain for two years. If people are waiting to see sufficient numbers of deaths before declaring a famine, the death toll will greater than in 2011.”

The head of the paediatric department at Banadir Hospital in Mogadishu, Dr Aweis Olow Hassan has worked through the famines of 2011, 2017 and this year. “This is the worst,” he said.

The department, which is supported by Concern, treats children too sick to be cared for in community clinics. Its case load has jumped from 200 to 300 cases per month. Some of the mothers travel more than 500 kilometres to get there, with some children dying on the journey, he said (see video link in Notes to the Editor).

Ms Abdulla said death rates were being controlled to date by targeted responses over the last 12 months by humanitarian organisations, focusing on the worst impacted areas.

“But this comes at a cost because we are foregoing support for areas that have been equally effected but are not at as great a risk. However, that could change in a few months.”

Concern’s teams were treating increasing numbers of severely malnourished children who were helped and then discharged back to displacement camps where there was no water, food or cash support, she noted.

While it is not possible to estimate the extent of the humanitarian crisis in parts of Somalia which are inaccessible to humanitarian organisations as a result of insecurity, Ms Abdulla said the number of severely malnourished children attending stabilisation centres and the number of deaths of children at health facilities was comparable to early in 2011. The famine was declared in July, 2011.

“If we are waiting for numbers to reach a certain threshold before a famine is declared (and funding is provided) we will have untold suffering for thousands of children.”

As part of its response to the hunger crisis, Concern is operating a pilot programme funded by EU ECHO and the British Foreign, Commonwealth and Development Office, to provide mobile cash payments to vulnerable families in inaccessible areas.

“Once business people know there is cash in a community they take the risk of transporting commodities into the area for sale,” Ms Abdulla explained. The pilot programme is currently supporting 2,500 vulnerable families but, if successful, they hope to increase this number.

“The programme is helping save lives as well as ensuring people do not have to leave their communities in search of help,” she said. One million people are already displaced in Somalia.

The UN estimates the number of people affected by the drought in Ethiopia, Kenya and Somalia is 36.1 million, with 20.5 million 'waking each day to high levels of food insecurity and rising malnutrition'. The UN predicts these numbers are likely to rise to 23-26 million by February, 2023.

Responding in Kenya and Ethiopia

In Ethiopia, Concern’s activities include cash transfers, water trucking, rehabilitation of boreholes and latrines, water and sanitation, the distribution of food and non-food items, and treatment of malnutrition.